Power primer: What you need to know about Artificial Intelligence research in Edmonton

At the cutting edge of computer technology is the growing field of artificial intelligence and machine learning. Increasingly research and companies capitalizing on that research are affecting our daily lives. Siri's suggestions on your smart phone, Facebook's facial recognition capabilities when tagging photos, the algorithms used by robo-investment sites, emerging self-driving vehicle technology are all examples of Artificial Intelligence and machine learning.

Edmonton is a hub of artificial intelligence and machine learning in Canada. A research institute associated with the University of Alberta features in the national strategy on this type of research. Exciting entrepreneurial ventures are popping up in the city and world-class business labs are establishing divisions here.

What is artificial intelligence and machine learning?

Artificial Intelligence (AI) involves having computers, or machines, do tasks that appear to require human-level intelligence. Machine learning uses a set of algorithms that allow a computer to learn from data without being specifically programmed with that data, so in essence it learns from the data.

Why is Edmonton making a splash in this area?

The University of Alberta's computer science department is getting a tremendous amount of national and international attention. U of A has a large and growing faculty of researchers in the field and is also home to related institute AMII, the Alberta Machine Intelligence Institute.

U of A pops up as number 2 in the world for academic papers and research on Artificial Intelligence and machine learning on CSRanking.org, an international ranking of computer science research institutions.

DeepMind, a research institution in the forefront of machine learning, chose Edmonton for its first lab outside the U.K. That decision caused a major ripple in the international science community. The Royal Bank's research and development lab Borealis AI also chose to establish a lab in the city to capitalize on the city's talent pool of graduating students and the growing Artificial Intelligence community here.

"Great minds attract great minds," says Mario Nascimento, professor and chair of the U of A's department of computing science. "As a global leader in AI research the University of Alberta's many excellent professors and researchers produce leading-edge scientific discoveries and play a vital role in attracting and retaining top AI talent and companies to Edmonton."

What is DeepMind and why is it here?

In the past couple of years DeepMind garnered international press coverage when its AlphaGo team beat the human champ in the notoriously complex ancient Chinese game of Go. The company/research lab was founded in the U.K. in 2010, acquired by Google in 2014 and is now part of the Alphabet group. Among other projects, DeepMind works with the National Health Service in Britain on lifesaving technologies, collaborates with Google on energy efficiency and does research on the ethics and impact of machine intelligence on society.

DeepMind wanted to recruit three key researchers from the University of Alberta, Richard Sutton, Patrick Pilarski and Michael Bowling. But they didn't want to leave the city or the teams they had built at U of A. The DeepMind decision in mid 2017 to build with the professors and open a lab in Edmonton was a "global head snap" moment in terms of recognition for Edmonton's AI community, Pilarski told the Edmonton Journal at the time. There are now 15 researchers at the DeepMind lab in downtown Edmonton.

Professor Bowling says DeepMind came here partly because the firm had many U of A graduates working for it in England. Now DeepMind is here, more graduate students interested in machine learning are coming to the U of A, he adds.

It has been a research lab at the University of Alberta connected to the department of computer science, although there are some faculty of medicine researchers and one from the school of public health also involved in AMII research. All the researchers are full professors. AMII also has a consulting arm which does collaborations with industry.

"We believe in a careful balance between basic and applied research," says Cameron Schuler, executive director of AMII. "Curiosity-driven research is crucial for bringing humanity to places we'd never imagined before, and for that research to have the broadest impact possible, we need to bring it out of academia and into our daily lives. AMII builds collaborations with this in mind as we seek out industry partners that can help us focus research on solving big problems and driving tangible real-world benefit for Alberta and beyond."

In the wake of the being named a hub by the pan Canadian AI strategy, AMII will now reorganize as a not-for-profit separate but affiliated with the university and hopes to have that status up and running by mid 2018. It will create an innovation campus and is looking for a new home in downtown Edmonton where academics, startup businesses, governmental groups and industry partners will meet.

Edmonton is developing a community of home-grown independent startups and small firms. Companies such as Granify, a company which maximizes on-line shopping revenue; PFM Scheduling, which tackles complex shift scheduling in large institutions; and Testfire Labs, which is developing a smart product to make business meetings more efficient and productive, are able to capitalize on the talent base of graduates coming out of U of A, the Northern Alberta Institute of Technology and Macewan University plus the growing collaborative community of entrepreneurs able to find support at community sponsored institutions like Startup Edmonton and TEC Edmonton.

The businesses are in various stages of entrepreneurial growth. Testfire Labs is a new business with less than 10 employees still Beta-testing its meeting assistant Hendrix.AI, a computer persona which monitors and analyzes business meetings to make them more efficient. Granify, which has been around for a few more years, has 18 employees at its office in Edmonton, 14 at a recent expansion in Austen, Texas and another four in New York City. 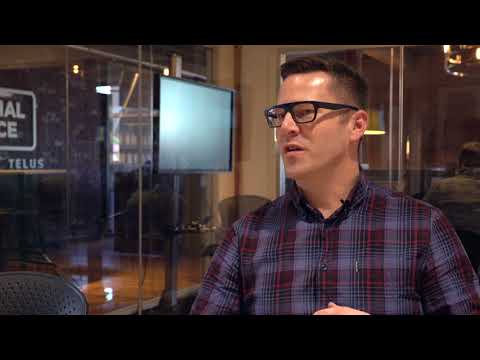 What is Borealis and why is it in Edmonton?

RBC has opened a branch of its machine learning and AI research institute, called Borealis AI, at the U of A. The institute collaborates with the university and researchers at Borealis and U of A faculty work on some projects together, says Foteini Agrafioti, chief science officer for RBC and head of Borealis AI.

Borealis, which also has labs in Toronto and Montreal, has two teams. One does curiosity based research, "the same topics you would find researched at universities and research centres," says Agrafioti. The second team applies machine learning to specific business problems. "Most of our business goals are within the financial services but we also work on topics in health care and biotech."

"It’s not just about building intellectual property for the Royal Bank to use. It’s about advancing the field of machine learning, pushing the boundaries and you cannot do that ever in isolation. It takes a community.

We want to understand how the brain works. At the end of the day that’s what every researcher in machine learning is trying to do
Foteini Agrafioti Head of Borealis AI

"We want to understand how the brain works. At the end of the day that’s what every researcher in machine learning is trying to do," says Agrafioti.

Borealis AI has recruited Prof. Matthew Taylor from Washington State University to lead its Edmonton lab which has 10 full time research staff and 10 positions for internships for students.

Labs like Borealis offer an opportunity for U of A graduates to stay in the city, she says, and the growing reputation in these fields is attracting talent from outside as well. "We are looking at international talent that is recognizing that Edmonton is the place to be if you want to be in the front line of reinforcement learning. So having conversations about immigrating to Canada and taking on research roles here — these are rock star researchers — has become extremely easy."

The Borealis AI lab is presently in a building next door to AMII at the university but it will move downtown eventually, says Agrafioti.

Will giant AI companies like Amazon and Google put commercial operations in Edmonton?

Maurice Sevigny CEO of PFM Scheduling, says the city could be on the cusp for that type of private sector investment.

"I think Edmonton is getting to a point where we’re recognized for the talent that comes out of our postsecondary institutions. There are a lot of grads who have moved to Silicon Valley. I think that creates a lot of attention," Sevigny says.

"If I'm sitting in Apple or Google, I’m thinking 'How do I reduce my recruitment dollars? How do I reduce overhead?' Opening a place where there’s a large talent pool is paramount. I would expect we would be on their radar."

Jeff Lawrence at Granify agrees. And although those big players will compete in the space they will also be good for the sector in the city, providing training and experience for young AI and machine learning researchers.

What about money for research, startups and investment for growing companies?

The Pan Canadian strategy earmarks $125 million over five years to AI research, with Edmonton receiving $25 million. This funding will be used to attract and retain top AI talent in order to grow Canada's place as a leader in AI research, and the ultimate goal of the strategy is to increase the university's ability to interact with industry.

Servus Credit Union has announced $1.6 milliion over five years for the U of A for research projects in AI and to fund a new industrial research chair.

Borealis AI helps fund projects it is doing in collaboration with U of A researchers.

On the entrepreneurial side, Testfire Labs founder Dave Damer says while there are some matching funding programs available there is a need on the startup front for initial seed money.

"I think if you just had an idea and the willingness and the time to commit to something, if you had the access to $20,000 to $50,000 in seed capital here you could get something started," he says.

TEC Edmonton recognized PFM Scheduling as one of the successful spinoff firms in 2017. That type of recognition and featuring these firms on TEC's websites and in presentations is designed to introduce them to encourage commercialization and attract investors, says Kumar.

Edmonton is Home to a Leader & Pioneer of Reinforcement Learning