Medo.ai aims to make getting an ultrasound as easy as going to your family doctor

Imagine being able to understand the cause of your chest pain or screen for liver cancer using your smartphone.

While home use is likely years away, Dornoosh Zonoobi and her team at Medo.ai have developed a software using artificial intelligence and cloud computing that eliminates the need for an expert to perform or analyze an ultrasound scan.

Medical imaging is critical to the diagnosis and treatment of many medical conditions, yet nearly two-thirds of the world’s population does not have access to the most basic radiology services. This gap is most profound in developing countries, but,, as Medo’s founders realized, access isn’t always great in developed countries either.

While completing her fellowship at the University of Alberta’s faculty of medicine and dentistry along with Dr. Jacob Jaremko, the tech CEO saw patients wait weeks for a simple ultrasound scan. Others would drive for hours or be flown in by helicopter for the procedure. “This doesn’t make sense,” thought Zonoobi, “all these people flying and driving to get a scan from a device that is so portable.” 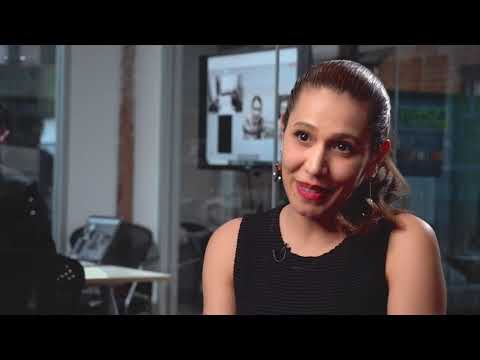 Together, Zonoobi and radiologists Jaremko and Dr. Jeevesh Kapur began working on software to augment current ultrasound technology. The first product was built around hip dysplasia — a hip joint abnormality that causes osteoarthritis if it isn’t caught early.

Medo’s technology transforms a series of scans taken from different angles into a 3-D model of a baby’s hip. Using machine learning algorithms, the 3-D model is then compared against a database of millions of other scans to produce a recommended diagnosis in real-time. The software is device agnostic and was developed as a web application to ensure accessibility — all you need is an ultrasound tool and an Internet connection.

In addition to being an area of interest for Dr. Jaremko, hip dysplasia was chosen because the condition can be diagnosed with a single imaging modality (there is no need for a secondary scan from a CT or MRI machine).

But Medo envisions ultrasound becoming a primary diagnostic tool for multiple health conditions — primarily because it is safe (there is no radiation involved), cost-effective and portable.

“It’s giving a tool to clinicians that they’ve never had before,” says Zonoobi. “Until now, your family doctor has been relying on what you say, some physical tests, and a simple stethoscope, when making a diagnosis.”

It’s in the developing world, however, that the innovation will have the biggest impact.

According to the World Health Organization, 80 to 90 per cent of the imaging needs in these countries can be met by X-Ray and ultrasound alone. But as cheap and portable as ultrasound has become (there are now pocket-sized systems), access to the technology remains limited due to a lack of qualified sonographers and radiologists.

Kapur, who is based in Southeast Asia, has experienced this gap in access firsthand. He is often travelling the region to run workshops and teach in places where ultrasound expertise is not available. By allowing front-line workers to perform ultrasound scans, Medo’s software could help close the global radiology gap, he says. And soon.

The dual-headquartered (Edmonton and Singapore) startup is growing at an incredible pace. As the company celebrates its one-year anniversary this month, the development team — many of whom are University of Alberta computer scientists — is busy finalizing the software for clinical trial. The plan is to apply for U.S. Food and Drug Administration approvals in March.

The company also recently closed an oversubscribed seed round and has begun working on other medical conditions that require point of care imaging.